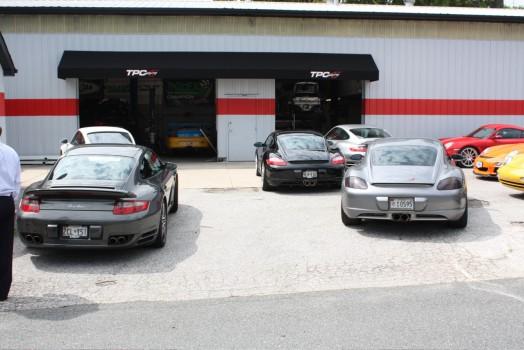 As a child, I owned something called the Lego “Expert Builder Car”. It was a fascinating product. From one box of a thousand or so Lego pieces, it was possible to build many different kinds of cars, up to and including a two-seat roadster with a working transmission. Top-notch fun, and if Lego eventually took it off the market in favor of less advanced kits focusing on Star Wars, Disneyworld, and (possibly) Twilight then we have only the abject failure of the American educational system to blame.

Porsche has a Lego set as well. The same basic set of components is used to create everything from a $45,000 Boxster to a $230,000 GT2. If you think it costs five times as much to make a GT2 as it does a Boxster, you’re probably an outstanding candidate for one of those $11,000 Hublot watches that uses an el-cheapo ETA mechanism to actually tell time. Nope, it’s mostly additional profit at the top of the pyramid. Porsche protects their oh-so-exclusive product ladder by refusing to assemble their Legos into toys like, say, a turbocharged Cayman.

If one listens to Porsche spokespeople, they have many reasons why a turbo Cayman wouldn’t be possible, feasible, or reasonable. These reasons are quite convincing, and they are repeated ad infinitum. Eventually the strong impression is created that a turbo Cayman would be a feat equal to, say, the Manhattan Project. Which makes it all the more interesting that there’s a guy in a shed who builds them for ten grand.

Well, TPC’s Mike Levitas isn’t exactly a guy in a shed. He’s a former Rolex-GT-at-Daytona winner with an extensive engineering background, and he’s devoted a lot of thought to his pressurized Caymans. For $9,995 plus installation, he will put nearly five hundred horsepower behind the seats of Porsche’s factory-crippled hardtop Boxster.

I recently had the opportunity to drive a rather well-sorted TPC Cayman S Turbo at the company’s headquarters outside Washington, DC. In the name of “balance” — something Levitas can wax rather poetic about, given the opportunity — this car was set up for approximately 380 horsepower at 5psi or so of boost and modified with a variety of JRZ and TPC suspension items.

Outside of a racetrack, it’s difficult to get even a standard Cayman 2.7 to its limits, but I was able to verify in a few short triple-digit blasts that TPC’s power numbers seem very legit. This car has pull to match a GT3 and shame a 997S, delivered across a very broad torque curve. If anything, it feels stronger than a GT3 until the very end of the rev range. Naturally, TPC will happily reprofile your boost curve if you want that top-end hit for road course work or midnight street racing.

The rest of the TPC mods also seem reasonably successful. It’s not difficult to imagine that this car would run in nearly a dead heat with a brand-new GT3 around most road courses. Ride quality is no worse than what you would find in said GT3 and pothole compliance appears to be excellent. The (anonymous by request) owner of this particular example uses it as a daily driver and a stealthy, confusion-causing trackday toy. You could do the same.

And you could do it cheaply, relatively speaking. Early 3.4-liter Caymans are now crossing auction blocks for forty grand. A $25,000 check to TPC would nearly duplicate our tester, so it is perfectly possible to obtain Z06-matching performance for the price of a lightly-used Z06. Or you could look it as GT3 lap times for half price. Porsche Cars North America would no doubt prefer you didn’t.

Which brings us to one tiny problem with this lovely mid-engined coupe. The watercooled Porsche engines produced from 1997 to 2008 are famously fragile, even without turbocharging. Porsche kept its split-case race-style engine for the Turbo, GT3, and GT2 until the recent arrival of its completely re-engineered waterboxer. There is no way that this particular Lego set will be as durable as, say, a 2001 996 Turbo. Perhaps this was the reason Porsche never turbocharged the car, although it doesn’t explain why there’s no new-generation Cayman Turbo. Oh well. TPC states that they have yet to experience a turbo Cayman or turbo Boxster failure, which may be reassuring enough for most buyers.

As the price of Porsche’s 911 Carrera sneaks ever closer to $100,000 in even mildly-equipped form, it might be time for the German fiscal adventurists to admit that their core product is becoming rather irrelevant. A factory Cayman Turbo would offer performance just shy of the Nissan GT-R and Z06 Corvette for similar money. That’s a formula that has worked for Porsche in the past (see: 1986 Porsche 944 Turbo) and it could work again. Heck, it might just create a new generation of Porsche fans. If the men from Weissach want some help assembling their Legos, I suspect TPC would be happy to take their call.

TTAC Review: TPC Racing 775Blitzkrieg The fastest car I have ever driven is, without a doubt, the Switzer P800 variant of Porsche’s... read more

Autoblog Review: The TPCRacing Cayman Turbo When Porsche introduced the Cayman in 2006, one thing was abundantly clear: Porsche had muzzled its midship coupe... read more