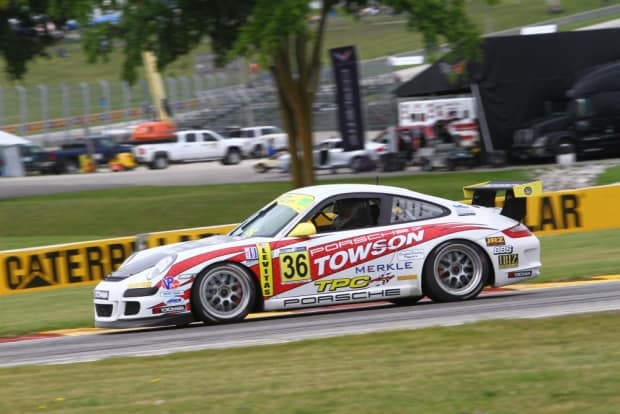 (August 14, 2013) Jessup, MD – For rounds nine and ten of the IMSA GT3 Cup Challenge by Yokohama Series, the TPC Racing / Porsche of Towson / Merkle team was at Road America. This was the first time that the team had been to Road America, and all three cars were fast right out of the trailer.

In practice, the TPC Racing Porsche GT3 Cup cars were great. While Ben Keating and David Williams have been to Road America before, Michael Levitas used the test sessions and first practice to learn the course to be competitive. While learning the track, Levitas still had an impressive lap time to put him in the top three; that is when the team knew that the car was good. The team made chassis adjustments to help better the handling of the cars and the 35 car of Ben Keating, 36 of Michael Levitas and 37 of David Williams were ready for qualifying.

For qualifying, Ben Keating had a strategy that he pulled off in the 35 car. In the 36 Porsche of Towson entry, Michael Levitas drove his car to a starting position of third for the first race and set his second fastest lap time to be that of starting first for race two. David Williams was consistent with his lap times and qualified sixth in the Gold class.

At the start of the first race, the 35 Porsche of Towson / Merkle entry had a great start, as Keating started moving his way up through the field and his strategy was playing out. Ben started further back in the field as he did not want to do many qualifying laps on the tires and rolled off in the twenty-second spot on the grid. Even with lengthy cautions in the beginning of the race, Keating was able to drive up to eleventh spot which earned him the Yokohama Hard Charger Award.

“The TPC Racing / Porsche of Towson GT3 Cup was great today,” Keating said. “The team worked hard to give me a great car and once again delivered a fast car that I could drive through the field with. We had a strategy going into qualifying that worked out for me and at the start I stayed out of trouble and made my way up through the field. Thank you to TPC Racing for the great car and I look forward to Baltimore.”

The 36 Porsche of Towson / Merkle entry of Michael Levitas had a great start. Michael took over the lead after a nice battle and held on. On the last lap while leading the race in turn six, Levitas got hit in the left front which caused the tire to go down and Michael finished in the fourth position but took second place in the Masters class. In race two, Levitas started on pole. It was a wet race, and Michael did not want to take chances as he was learning a wet line and also in the lead of the race. The second race was full of long cautions and Levitas finished in third but won the Masters class.

“It was a great race, a great race,” Levitas said. “The Porsche of Towson TPC car just did incredible. We made a little bit of a change before the race I thought it would give me some rear grip but it gave me a little too much, and it cost me about a half of a second a lap, and it really hurt. But what really hurt is that I had the lead up until the very last lap. But we still pulled off P3. My teammate Dave Williams–my hat goes off to him. Dave Williams did a supreme job he brought that car into second place and he was a steady guy he was strong and there at the end and that’s what matters.”

“In the second race things got a bit crazy with the rain and extended cautions, but David and I were smart and worked as a team. We survived the race and moved up in class without making a mistake. It was great to win the Masters class and have my teammate David Williams in second”

David Williams drove a fantastic race in both the first and second race of the weekend. In race one, David was setting consistent laps which had him finish in second place in Gold and Williams took the win in the Masters class with his 37 Merkle / Porsche of Towson machine. In race 2, David had a great race in the rain. Williams started in sixth and worked his way up to fourth before a long caution came out. David was faster than the top three, and was looking forward to a strong run to the front but the race finished under caution. The fourth place finish would put Williams in second in the Masters class and would also see David winning the Yokohama Hard Charger Award for the second race of the weekend.

“It was very crazy,” Williams said. “But it ended up being a good race. The restarts were crazy everyone got jammed up coming up the hill and Turn-1 and Turn-3 was just nuts but ultimately great race and great venue. My TPC Racing / Merkle car was great. As always, the team gave me a great car to drive to a podium finish.”