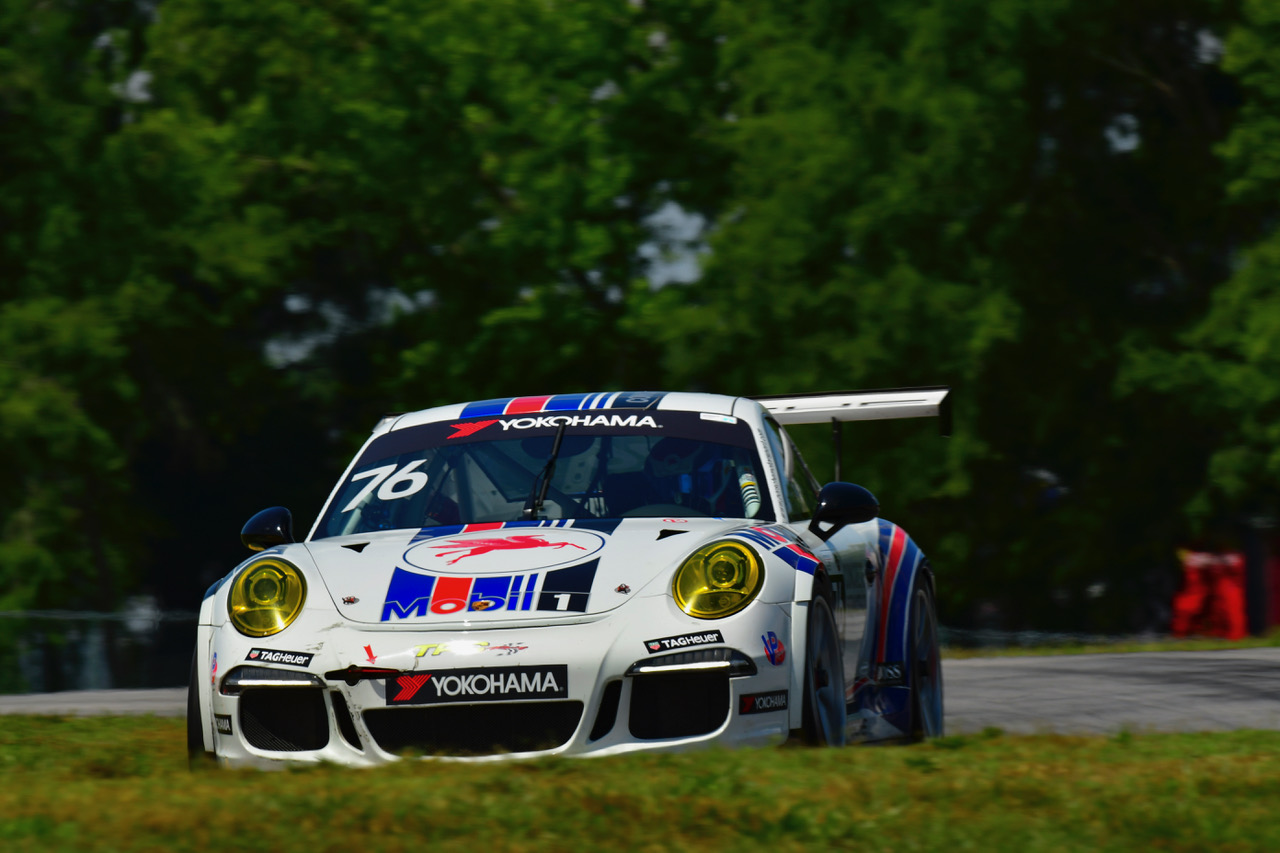 DANVILLE, Virginia (June 7, 2021) – TPC Racing stared down a difficult Porsche Sprint Challenge North America by Yokohama doubleheader weekend at Virginia International Raceway (VIR) this past weekend, leaving with a podium finish and an additional award for passing the most cars in Sunday’s race.

Rich Schoeneborn, making his championship debut in the No. 76 Concrete Services Inc Porsche 911 GT3 Cup, had the best finish of the weekend of TPC Racing’s six-car entry when he grabbed a third-place Gold Cup finish in Saturday’s 40-minute Sprint Race. Shoeneborn followed that up by punching through some opening corner chaos down the inside of turn two and running the race distance for a fourth-place class finish.

Vernon McClure also dodged Sunday’s early-race chaos to make multiple positions. Starting 13th in the No. 101 Main Street Homes/TPC Racing Porsche 911 GT3 Cup, McClure found a gap in the traffic and climbed all the way to fifth on the opening lap. He made his way into fourth and was challenging for the podium when a small mistake with three laps to go caused a spin, ultimately leading to a seventh-place position. It was a strong run for McClure, who hadn’t been been behind the wheel since the Porsche Carrera Cup North America debut at Sebring in March and will return to that championship in less than three weeks at Watkins Glen International. His run also earned him the race’s Apex’n Award for passing the most cars on track during the race. 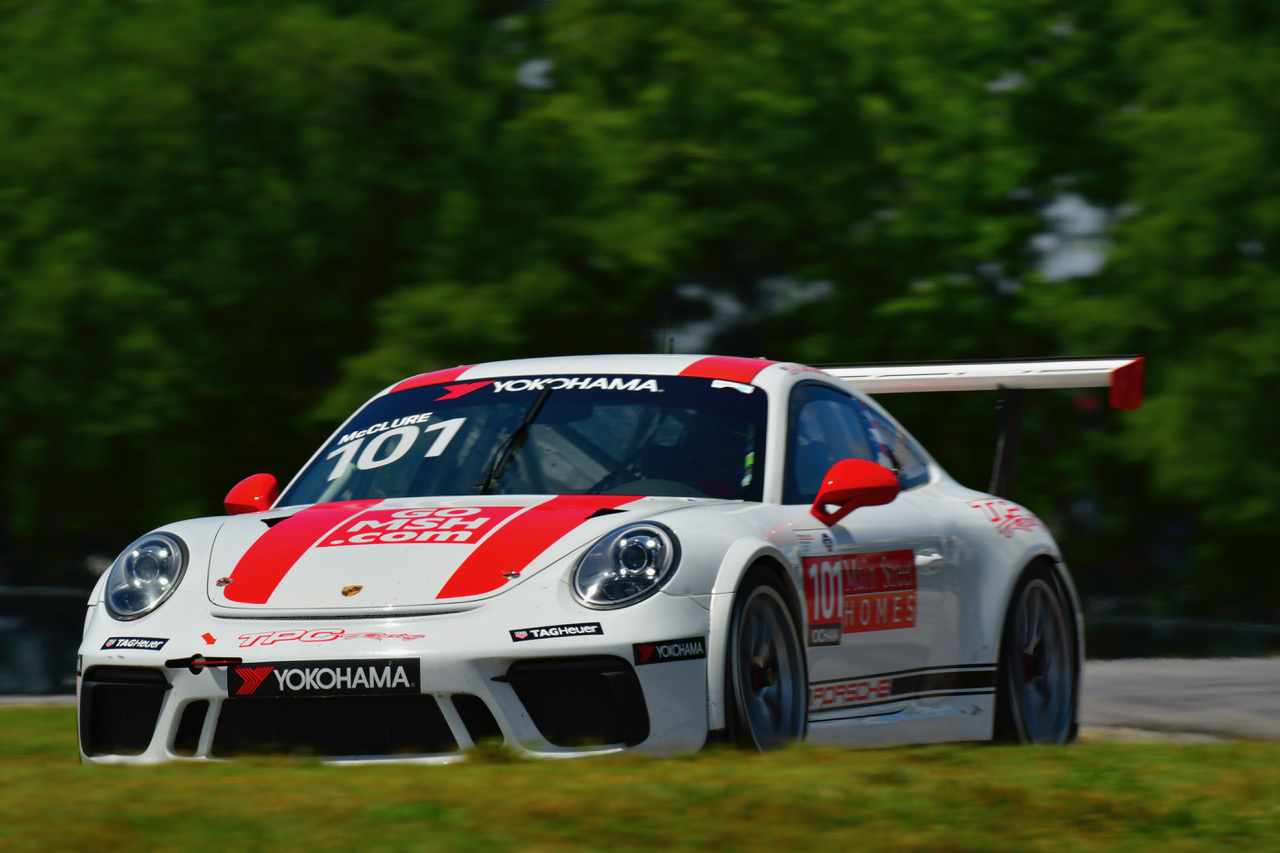 Michael Levitas and Rob Lorndale were not as fortunate in the opening corners. Levitas, who qualified the No. 36 Erin Levitas Foundation/TPC Racing Porsche 911 GT3 Cup fifth overall for Sunday’s race, dodged the first spinning car but spun himself coming back onto the track and was forced to sit sideways while the entire field went by. While cars split left and right around Levitas, Lorndale’s No. 6 TPC Racing Porsche 911 GT3 Cup came to a stop just behind him and also rejoined the race at the tail end of the field.

Levitas, who also led the opening lap in Saturday’s race, rebounded and drove through the field to finish in sixth place overall and in the Platinum Cup class. Lorndale finished fifth in Gold Cup class for the second-consecutive day and held fourth place in the season-long point standings.

Jordan Wallace earned a fifth-place finish on Saturday, and was ninth on Sunday, in the Silver Cup driving the No. 35 TPC Racing Porsche Cayman GT4 Clubsport.

TPC Racing’s Lamborghini Super Trofeo entry of Scott Schmidt and Trevor Andrusko rode a roller coaster through the weekend as well. Andrusko started eighth overall and first in the Am class in the No. 38 Lamborghini Sterling/Erin Levitas Foundation Lamborghini Huracan for Sunday morning’s 50-minute race. Andrusko led the class until the mandatory pit stop with 15-minutes remaining, passing the car to Schmidt. Unfortunately, late contact and damage left the car in sixth place and unable to return for Sunday’s afternoon race.

Noteworthy:
– TPC Racing also fielded an entry for Pedro Torres in the Gold Cup class. Torres qualified second in the Gold Cup class for Saturday’s race, but an incident in qualifying two left his car severely damaged and unable to compete in the weekend’s doubleheader.

– Engine troubles on the test day for Lorndale left his car out of commission for the event weekend. Fellow Porsche Sprint Challenge competitors ACI Motorsports loaned TPC Racing a Porsche 911 GT3 Cup for Lorndale to use for the VIR doubleheader. 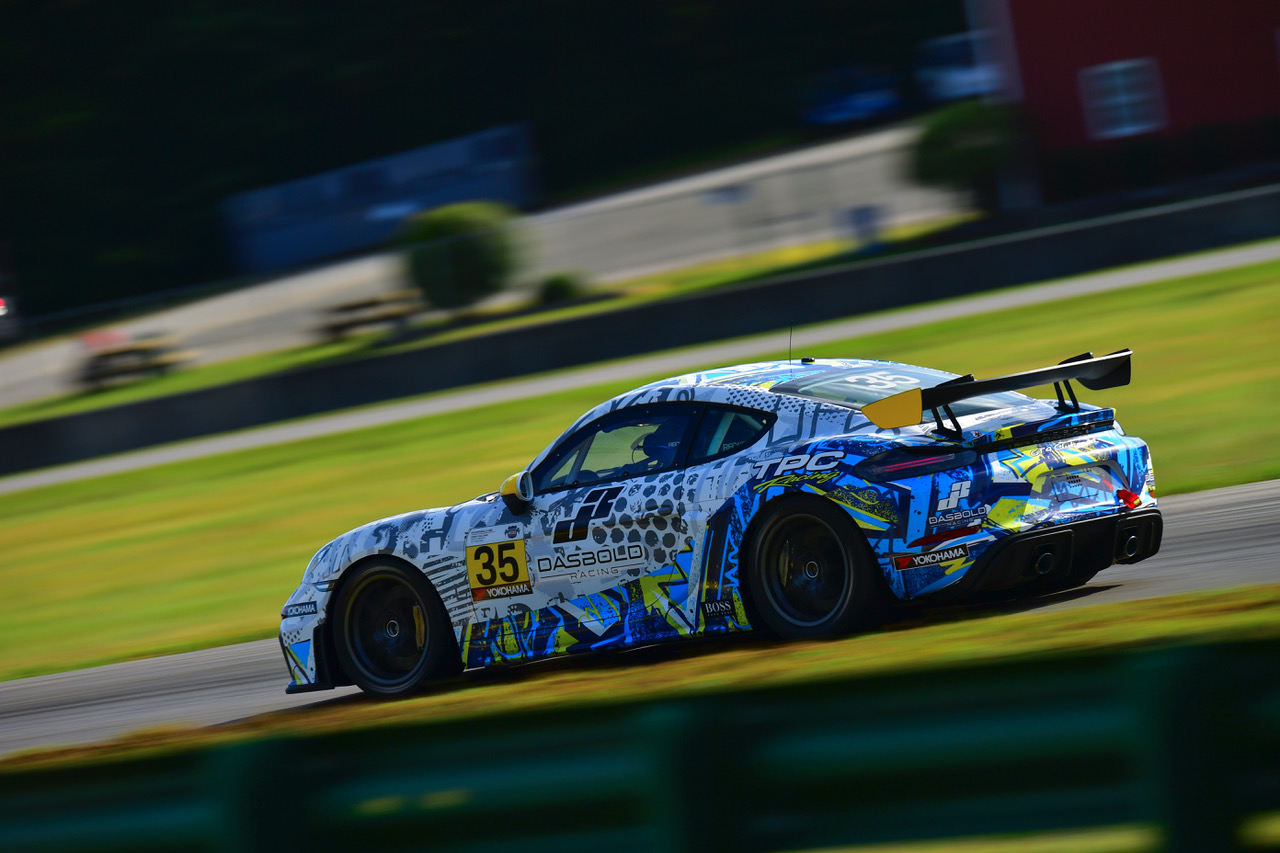 Harris Levitas, Director of Race Operations: “There were a ton of positives to the weekend. It seems like everything that could have gone wrong did, but we had just as many good things happen. We had awesome TPC Racing prepared cars. The guys worked so hard from COTA to this preparing the cars and we were fast right off the truck. Having Rich Schoeneborn join us for the first time after doing track days and club racing and land on the podium was fantastic to see. Rob had engine troubles, but luckily it happened on the test days and we were able to enter a leased car from ACI. We have to thank the Talkie family and Kurt Swearingin and everyone there at ACI for helping us make that happen. The 36 car had a critical start in race one and took the lead. On Sunday, Vernon got the hard charger and had a shot at third place. Jordan did an excellent job coming from the back in race one after we had a transponder issue, but got held up by a slow Gold Cup car in race two and that hurt him. But he did a great job for his second time out and will be even better in the next race. We had an electrical gremlin at COTA in the Lamborghini and the team went through everything and had it in perfect working order this weekend. Trevor did a fantastic job with his stint, and Scott was finding more time in his stint and was catching back up. They’ve come a long way in a very short time of racing. It’s such a strong car. Unfortunately Scott was involved in a pretty heavy hit, but it goes to show the way these Lamborghinis are built. What would have been total structural damage in another car was mostly superficial. We’ll put a new engine in at the shop and be back stronger than ever at Watkins Glen.”

Vernon McClure, Driver, No. 101 Porsche 911 GT3 Cup: “It’s great to be here. I love this track, it’s my favorite track and I’m pretty close to home here. The car was good today and I learned a lot yesterday in the race. I was right up there in fourth and I had my chance, I just blew it in turn four. It was awesome anyway. It was fun to race with everybody and be right in there. I got to finish right behind Levitas. The start was awesome for me because I went from 13th to fifth. I saw all these cars going both ways and it parted for me and I took off. I had a few laps and passed a few cars. It was a lot of fun.”

Rich Schoeneborn, Driver, No. 76 Porsche 911 GT3 Cup: “It couldn’t have gone much better. I’m ecstatic about the whole weekend. Things lined up and I raced the race I planned on, staying clean and consistent lap after lap. Some luck came my way as well. Today was super hot and the track got greasy. I saw a lot of cars sliding around and I made some mistakes and said ok, dial it down just a hair and bring this thing home in one piece. The car was great, the series is great and what a weekend to have my son here with me from Annapolis, Maryland. He’s driven the car at driver’s experience days but he’s never seen me race and he was stunned to see me on the podium! I was grinning the whole way around the track.”

Rob Lorndale, Driver, No. 6 Porsche 911 GT3 Cup: “It’s been a difficult week. We came to test for two days before the race weekend and I had a mechanical from the moment I got in the car. The guys worked like crazy to try and fix it but it wasn’t something that could be fixed at the track. I ended up renting a competitor’s spare car for the weekend, had no practice time in it, and jumped in. I felt reasonably comfortable in the car but I was cognizant of the fact that it was not my car and I needed to return it in one piece. I just really tried to play it conservatively and pick up some points. I maintained fourth place in the season-long standings which was my goal. I really enjoy VIR. I’m from the Washington, DC area and I have a fair number of laps here. It’s really terrific, it just wasn’t the weekend I hoped for.” 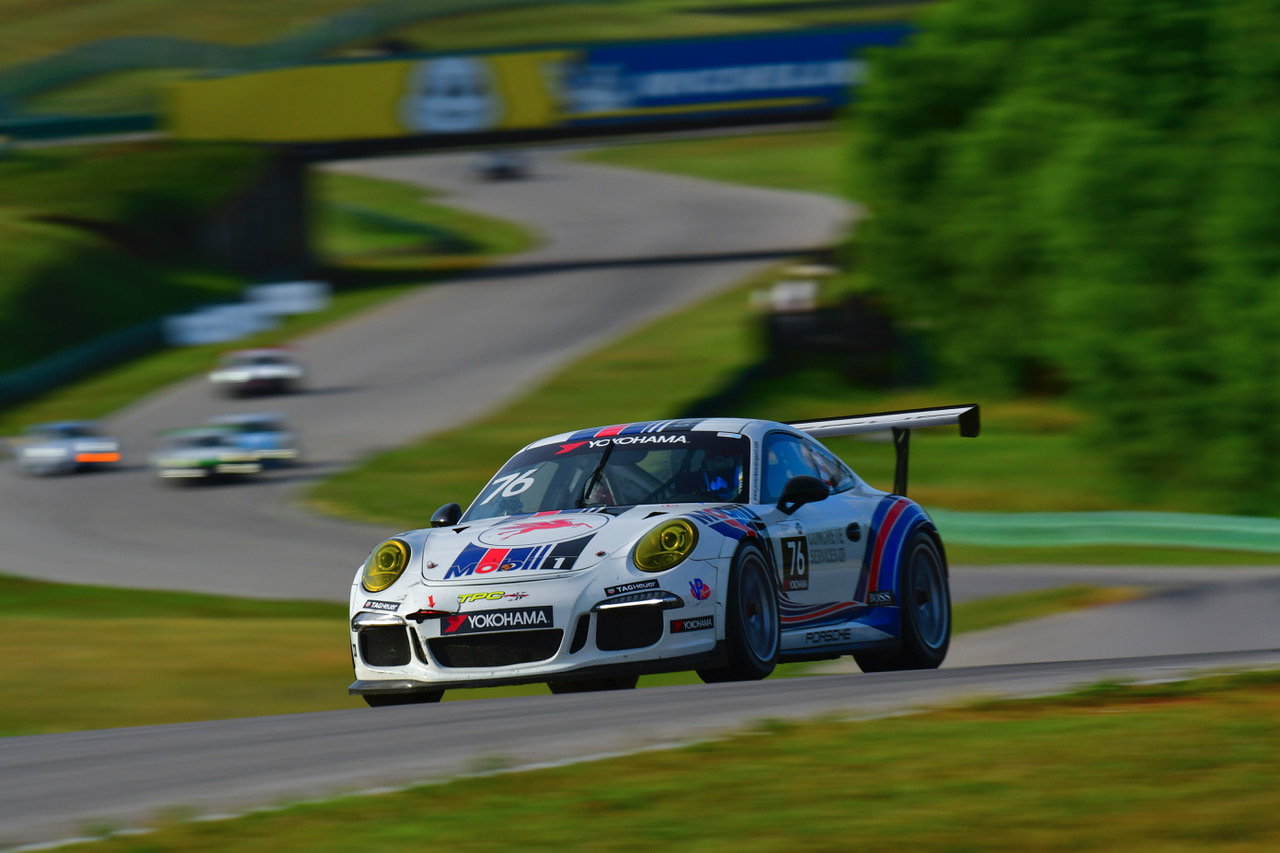 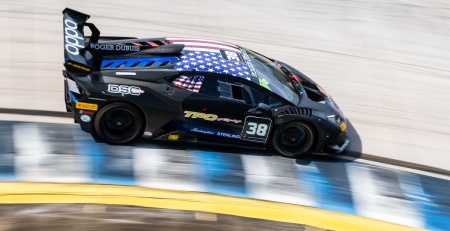