Taking the Platinum Masters win in his first weekend this year with GT3 Cup Challenge Canada was Michael Levitas in the No. 37 TPC Racing Porsche.

Home / Uncategorized / Taking the Platinum Masters win in his first weekend this year with GT3 Cup Challenge Canada was Michael Levitas in the No. 37 TPC Racing Porsche.
Return to Previous Page 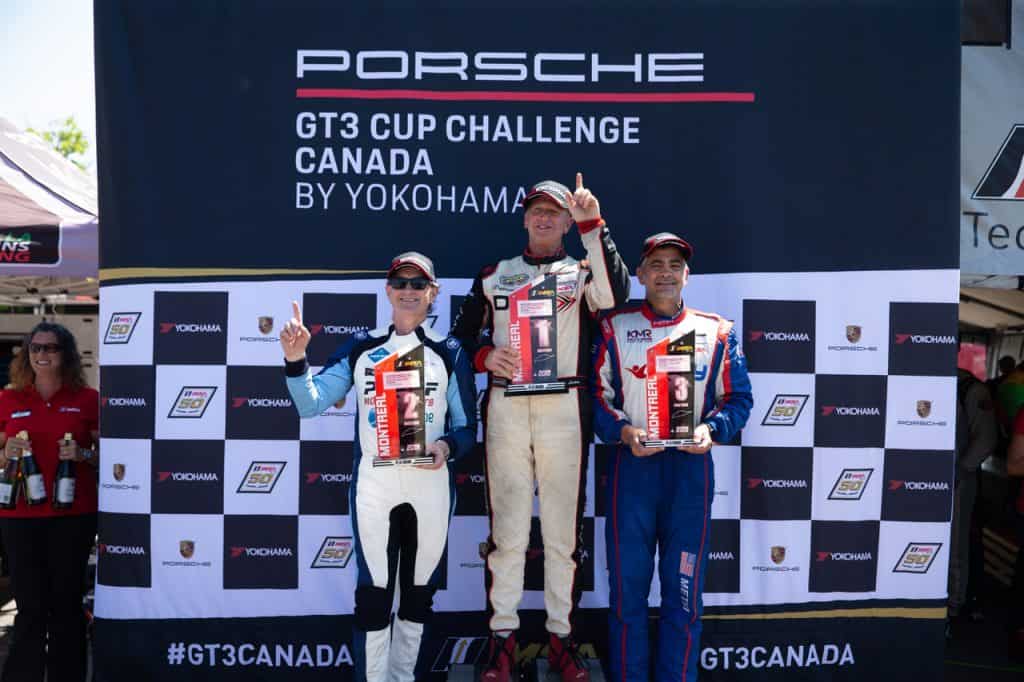 Taking the Platinum Masters win in his first weekend this year with GT3 Cup Challenge Canada was Michael Levitas in the No. 37 TPC Racing Porsche.

He had to work a bit harder for it on Sunday, but Roman De Angelis once again found his way to the top step of the Porsche GT3 Cup Challenge by Yokohama podium at the Canadian Grand Prix in Montreal.

Coming off a pole position and win in Race 1 on Saturday, De Angelis started from the first spot in the No. 79 Mark Motors Racing Porsche, but surrendered the lead to Parker Thompson shortly after the drop of the green flag on Lap 1.

Thompson opened a gap between his No. 3 SCB Racing machine and De Angelis, but the latter kept Thompson within striking distance. With 20 minutes remaining, Thompson made a minor mistake heading into the hairpin, locked up the brakes and went wide into the turn, allowing De Angelis to sneak by. De Angelis drove pressure-free for the rest of the race.

“The start was a bit interesting,” said De Angelis, who earned points this weekend in both the GT3 Cup Challenge Canada and GT3 Cup Challenge USA championships. “I obviously didn’t get the jump I got yesterday due to some other outside factors, but I was able to chase down Parker, pressure him for four or five laps and eventually just kind of led him into a mistake.

“We took the lead and did what we did yesterday and I pulled a big gap. It’s pretty cool to win double duty with both teams with the American and Canadian championship and it’s a huge points advance for us. I’m looking forward to keeping the points gap going.”

Behind De Angelis, it was a dramatic finish for the remaining two overall podium finishers – Max Root and Riley Dickinson, both GT3 Cup Challenge USA drivers.

Root in the No. 7 Wright Motorsports Porsche claimed his second podium of the weekend after finishing third in Race 1 and second in Race 2. Yet, Root never saw the checkered flag as he was involved in a late-race incident with the No. 74 TPC Racing Porsche of Tom Kerr. Root and Kerr made contact in Turn 11 that sent Root into the grass and Kerr into the inside wall. The incident brought out a race-ending red flag, but Root maintained his second-place position.

For Dickinson, the checkered flag initially awarded him a fourth-place finish behind Root and Thompson. However, Thompson’s move past Dickinson for third place resulted in a 29-second penalty equivalent to an in-race drive through and promoted Dickinson to the podium.

Thompson was relegated to a 10th-place finish overall. Like De Angelis, Thompson also earned points this weekend towards both the GT3 Cup Challenge Canada and USA championships.

Root’s Wright Motorsports teammate Fred Poordad collected another podium finish for the team in Race 2 driving the No. 20 Porsche. Poordad scored the Platinum Masters victory over GT3 Cup Challenge Canada and USA competitor Alan Metni in the No. 99 Kelly-Moss/AM Motorsports Porsche, who bounced back from a retirement in Saturday’s race.

“It was a great race today for me compared to yesterday,” said Poordad. “Yesterday my gearbox broke in the second lap and it was very disappointing. I had a broken axle in practice, so a lot of adversity that we had to overcome. Today was, I thought, a great race. This track is phenomenal. I raced here once before in 2016, but it was so long ago it seems that it was all new to me again. I thought the organizers did a great job to be able to run this in front of the Formula One race. Obviously it’s a really big crowd, a big deal and I think it went over really well, so I was just really happy to be a part of it.”

“It was a really fun race,” said Carazo. “I started way out in front so it was just being consistent, not looking back and just try to keep on driving. I lost the brake point in the last turn and Angel Benitez could get by. From there I just had to get my head low and started putting in good laps and I could pass him. I passed him on the front straight because it happened the same to him, so it was a little bit of luck there.

“(This) is a great event and I hope Formula One invites us again. I had so much fun, it’s great seeing all the fans in all the turns on the last lap. You could see all the fans cheering everybody on and it’s something incredible.”

Earning the Yokohama Tire Hard Charger Award for gaining the most positions during the race was Gold Class driver Efrin Castro in the No. 65 ACI Motorsports Porsche.

Rounding out the GT3 Cup Challenge Canada podium were Patrick Dussault in the No. 77 Lauzon Autosport Porsche and rookie Ethan Simioni in the No. 40 Porsche for Policaro Motorsports.

The runner-up result matches Dussault’s best of his GT3 Cup Challenge Canada career, which he first recorded at Canadian Tire Motorsport Park last month. It also comes on the heels of a frustrating Race 1 at Montreal for the Quebecker, who was spun early but salvaged a ninth-place finish.

For Simioni, a rookie in GT3 Cup Challenge Canada, the third-place finish is his best to date. Teammate Jeff Kingsley in the No. 16 Porsche – who also earned points towards the GT3 Cup Challenge USA championship with JDX Racing – finished just behind Simioni in fourth.

In the Platinum Masters class, Marco Cirone was seeking a weekend sweep of his own in the No. 88 Mark Motors Racing Porsche. However, a spin due to contact from another competitor demoted his Porsche down the leaderboard.

Taking the Platinum Masters win in his first weekend this year with GT3 Cup Challenge Canada was Michael Levitas in the No. 37 TPC Racing Porsche. Levitas was the highest finishing Masters driver in the field on Sunday.

“It’s absolutely awesome to race up here in Canada,” said Levitas. “I just love being up in Canada. I couldn’t be any prouder to represent Downtown Porsche and I couldn’t be more any more excited to represent TPC Racing. To come out here on the first weekend that we’ve had the opportunity to race with the Canadian series, I just couldn’t be anymore excited for Downtown Porsche and for TPC Racing. My hats off to IMSA and all the officials, I think they did a great job this weekend with both series running.”

Rounds 5 and 6 for Porsche GT3 Cup Challenge Canada by Yokohama are set for the IMSA WeatherTech SportsCar Championship weekend at Canadian Tire Motorsport Park on July 5 – 7. Follow series news on IMSA.com or on social media with the hashtag #GT3Canada.

Rounds 7 and 8 for Porsche GT3 Cup Challenge USA by Yokohama are set for the IMSA WeatherTech SportsCar Championship weekend at Watkins Glen International on June 27 – 30. Follow series news on IMSA.com or on social media with the hashtag #GT3USA.

TPC Racing is the premier Porsche facilities in the greater Washington D.C. and Baltimore area, serving the area for over 20 years.

Use this form to find things you need on this site