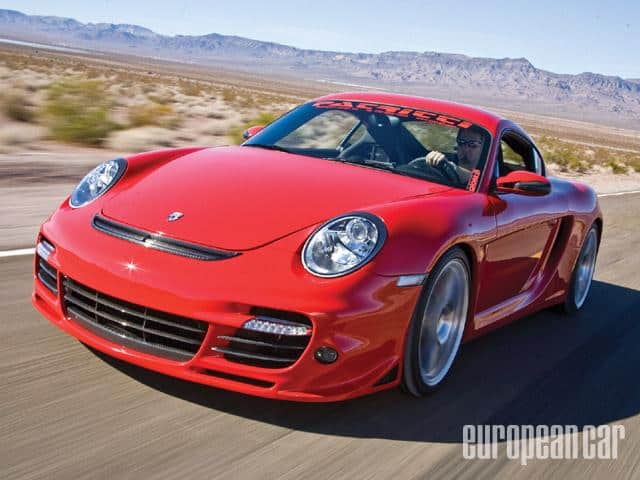 We were halfway across the Nevada desert when the brakes began to take hold. The cabin filled with the rush of cool desert morning air as owner Larry Dye put his Cayman through its paces. Although we weren’t equipped with timing gear, the run from 0 to 100 went by in around the time it takes to read this sentence. Getting up to the nasty side of 120 wouldn’t have taken much longer had our high-speed antics not been immediately taken down to speed after a nasty grating sound erupted on the rear underside of the car.

We originally spotted this incredibly savage Cayman at the SEMA show only a day earlier. While the minor glitches in this monumental (or maybe just mental) project have since been sorted out, that wasn’t the case right before the show. Like many cars featured in the hallowed halls of the Las Vegas Convention center, it was completed under a fairly suffocating schedule. Various glitches in the buildup ensured that turbo and suspension installers TPC in Baltimore, Md., only had one day to tune it before Dye had to get the car on a trailer and haul it cross country.

When he originally acquired the car in May 2007, he had no idea that the project would grow to this magnitude. “I originally tried just upgrading the exhaust, headers and suspension,” he says. “But I was left wanting more power. Lots more.”

While the Cayman S is no slouch, especially compared to its older hairdresser sister the Boxster, Dye had to wonder what the mid-engine track attacker could do with 911 power. To make his vision a reality, he took the car to Stephen Kaspar at Imagine Auto in Kansas to swap in a 3.8-liter X51 Carrera S crate motor with the intent of putting a supercharger on it later. The engine actually had to be installed lower in the bay than normal using a hodgepodge of Porsche parts–mounts, bushings, and so on–to accommodate the new powerplant’s higher intake profile.

Like a father expecting octuplets, with more power on the way Dye knew he would need more room–for wider tires, that is. So he began scouting around for a widebody conversion. The search led him first to TechArt, then to Atlanta, Ga., where Patrick Patritti has acquired a reputation for making widebody conversions to 996 911s and 986 Boxsters. Dye convinced Patritti to fabricate a completely new kit based on the Cayman in carbon and Kevlar.

With the bodywork complete, every exterior panel except the aluminum bonnet has been modified or replaced entirely. Overall, the dimensions are approximately 7 inches wider in the rear and 3 inches wider up front. The front bumper was modeled after that of the 997 GT2, the rear modeled after that of the 997 GT3. Patritti also included a custom carbon undertray and rear diffuser to reduce turbulence beneath the car and reduce lift at speed.

Prototyping for the body panels took about six months, and when it was finally done Dye took it to a shop called Kinetics for the final installation of the body and paintwork. During this process they added LED running lights, turn signals, and 997 bi-xenon headlamps and LED taillamp clusters.

“After the body conversion, I took it to Michael Levitas at TPC in Baltimore to have their 987 turbo kit installed,” Dye says. “Right now, TPC is getting roughly 545 hp from one of their 987 3.4s running just 6.6 psi of boost. I’m looking forward to what they come up with from the 3.8. I’ve been very lucky to have chosen what seems to be just the right mix of extremely talented people to work with.”

When Larry Dye wanted a mid-engine Porsche, and all the inherent capabilities that come along with it but bigger power, he went and acquired just that. And while the impromptu test and tune from a ride along with an ec contributor caused a ripped-off diffuser, it resulted in a superior replacement design that represents this entire widebody phenomenon.

I bought this 07 GT3 from a Chevy dealer in Albany, NY back in March. This car was pretty... read more