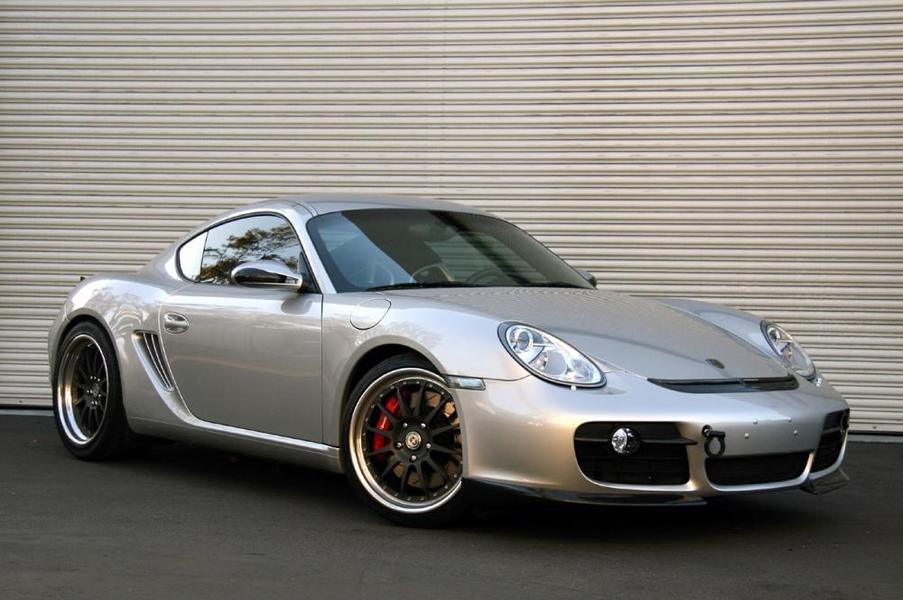 When Porsche introduced the Cayman in 2006, one thing was abundantly clear: Porsche had muzzled its midship coupe to prevent cannibalizing 911 sales. Despite a more favorable weight distribution and an unflappable chassis, the Cayman lacked the power to exploit its excellent underpinnings, even in “S” guise. So like its Boxster sibling, the Cayman was destined to play second fiddle to Porsche’s iconic rear-engine flagship. From a business perspective, Porsche’s decision made sense. For enthusiasts, it was yet another bitter pill from Zuffenhausen.

When the Cayman underwent a refresh, there was always hope that a turbocharged variant would be included in the line-up. Predictably, that never happened. So the Cayman continued to stand on the lower/middle rung of the Porsche ladder, offering less power and a lower price than the 911. The Cayman could dance. It just needed an extra bit of oomph.

That’s where Mike Levitas comes in. Mike is the brains behind TPCRacing of Jessup, MD. Born of a family of automotive tinkerers, Mike spent most of his formative years learning about turbos and turning that knowledge to race cars – fast, reliable race cars that won championships. Like most other Porsche enthusiasts, Mike thought the Cayman could use more power. Turbocharged power. But unlike most of the marque’s devotees, Mike made it happen.

Levitas began producing race cars back in the late Eightes, and over the course of the next decade and a half he managed the turbocharger programs for the Nissan 300ZX, Mazda RX7, Lotus Esprit and Consulier GTPs in the IMSA Supercar Series. Mike’s background and advanced aeronautical training eventually led him to build some of the best Porsche race cars around. Porsche Club racing, Motorola Cup action, and a brief dip into Mercedes sedans eventually led him to the Grand American Rolex Sports Car Series.

In 2000, TPCRacing began racing under its own banner, racking up more than 20 class wins (including one at Daytona in 2006) and an unprecedented 1-2-3-4 sweep of the driver’s championship. The team was so dominant that the lead car during that championship season never missed a podium. With all of that race history as a test bed, TPC thought it was time to offer some of its accumulated wisdom to the masses.

TPCRacing is now known as one of the premier outlets for readying your Porsche for track duty. Turbochargers, suspension upgrades and computer reflashing are all available to professional and club racers. And for those who’d like a little more performance out of their daily drivers, TPCRacing has you covered in spades. While most of the company’s work is devoted to 911s, TPC thought the Cayman needed a little something extra as well. They picked up a Guards Red 2006 Porsche Cayman S a couple of years ago and went to work. The result is the TPCRacing Cayman S Turbo Kit. Producing around 485 horsepower, it’s packing more ponies than – until recently – nearly any vehicle in Porsche’s lineup, save the GT2. And that’s only with 5.5-pounds of boost. With such a low amount of pressure, the turbo kit puts barely any additional stress on the stock internals of the 3.4-liter flat-six.

TPCRacing sells its Cayman Turbo Kit (with intercooler) for a buck less than ten grand. It includes nearly everything needed for installation: a cat-back exhaust, turbocharger, liquid-to-air intercooler, new intake plenum, all brackets/plumbing/fitting/hardware/clamps, upgraded injectors and custom silicone piping. The ECU needs to be shipped to TPC for reprogramming, but anyone with a fair amount of mechanical aptitude can do the installation. The total tab for our tester was about $12,000 according to the owner. Of course, he also went nuts with suspension, brakes, wheels, tires and body mods that more than doubled that figure.

A few extra bits are recommended by TPC, although they’re not included in the kit. Pop for a set of GT3 spark plugs as well as the factory Porsche front-center radiator and associated ducting and brackets, and it will add around $750 to the tab. Tiptronic cars can skip that last item, as they’re already equipped with the front-center radiator. The downside for Tiptronic owners is that the installation requires modifications to the transmission mounting brackets as well as relocating the transmission oil cooler.

TPC is also working on a non-intercooled Turbo Kit that eliminates the need for the liquid-to-air intercooler as well as the front center radiator and all the additional plumbing and water pump. Boost levels are a bit lower, but so is the price – an estimated $7,490.

We got a chance to sample the full-on intercooled turbo kit and, needless to say, it’s like no Cayman we’ve met before. It’s a mid-engine Jekyll and Hyde. In normal commuter duty the TPC drives exactly like any other Cayman on the road. That’s to say it has near perfect handling, with some of the best brakes and most precise steering ever engineered into a road-going vehicle. But dip into that throttle a bit deeper and… whoosh! As if a giant hand dropped down from the sky and gave you a gentle shove, you’re hurtled along into extra-legal speeds in seconds.

There’s no drama, only a throatier roar from the exhaust that fades as the RPMs drop. Although not quite as transparent as the factory turbo setup in the 997 Turbo, it feels just as fast. The power is available at seemingly any RPM too. There’s a progressive feel rather than the expected lag and burst of traditional tuner turbos – further proof that Mike and his crew know more than a thing or two about balancing linear performance and potent thrust.

Our seat time was all too brief, but it was more than enlightening. Levitas is a manic bit of energy, equal parts mad scientist and grassroots racer. Two of his customers, David and Kevin, happened to be computer engineers and even they were hard pressed to keep up with Mike’s constant stream of technical babbling. The one thing they definitely picked up is Mike’s passion for his work and ability to build an impeccably well-thought out and professional turbo kit.

Our sentiments and disappointments were echoed by several of Mike’s customers. While most would prefer a factory Cayman Turbo, Porsche didn’t build one. That left the door wide open for tuners and TPC happily stepped in to fill the void. For around $12,000 over the price of a Cayman, customers can have a unique, track-friendly daily-driver that’s ready to trounce its rear-engine grandfather, while still costing less and retaining its reliability. That’s a 400-hp formula we can get behind. Now we just need to start trolling Craigslist for used Caymans…

Story and Photos by: Frank Filipponio

Get the full Autoblog story here.

TTAC Review: TPC Racing 775Blitzkrieg The fastest car I have ever driven is, without a doubt, the Switzer P800 variant of Porsche’s... read more

TTAC Review: Porsche Cayman S Turbo by TPC As a child, I owned something called the Lego “Expert Builder Car”. It... read more